The city of Braga 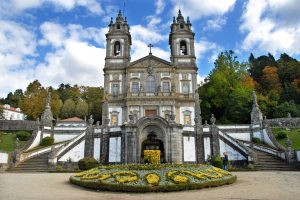 With more than 2000 years of history and located in the North Region and “Cávado” sub region, Braga is the District capital. The municipality, with approximately 184 km2 (114 m2), is divided into 62 parishes.

In the context of sub-regional policies of development and mobility, the city of Braga is the capital of the Great Metropolitan Area of Minho (Grande Área Metropolitana do Minho), the third largest of the country, formed by the parishes of “Amares”, “Barcelos”, “Braga”, “Cabeceiras de Basto”, “Celorico de Basto”, “Esposende”, “Fafe”, “Guimarães”, “Póvoa de Lanhoso”, “Terras de Bouro”, “Vieira do Minho”, “Vila Nova de Famalicão”, “Vila Verde” and “Vizela”: it has around 800 000 inhabitants.

Maybe the main religious center of Portugal, it is known by its Baroque Churches, splendid houses from the XVIII century, gardens and elaborated parks.

Owner of an exclusive gastronomy, is assumed essentially historic but also modern, where innovation marries in beauty with tradition.

A young City chosen by the European Youth Forum for European Youth Capital in 2012, is a town full of culture and traditions, where History and Religion live side by side with the technological industry and with the university study.

With beautiful and emblematic places, enjoy what the City has to offer and make us a visit!

ONE CITY, MANY DESTINATIONS! 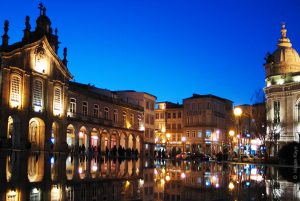 This once-genteel coffee house under a grand old portico it’s now a stylish cafe-restaurant with a lot of history and stories. The city of Braga was founded 2.025 years ago by the Romans as «Bracara Augusta».

Not surprisingly, at Café Astória you can admire a well preserved roman wall while drinking a nice glass of wine.

The Bom Jesus Church was designed by the architect Carlos Amarante under the order of the Archbishop D. Gaspar de Bragança to replace the primitive church ordered by D. Rodrigo de Moura Teles, that was in ruins. The construction started on June 1st , 1784 and was completed in 1811.

It is one of the first neoclassical buildings in Portugal and the façade is sided by two towers and ends with a triangular front.

The Sameiro Shrine, began its construction around the 19th century and it’s the largest centre of Marian devotion in Portugal, after Fátima.

The construction of the Temple was completed in the 20th century. From its interior we point out the high altar in white polish granite as well as the silver sacrarium. In front of the temple rises a wide majestic polished, which ends in  two pillars, topped by the Virgin and the Heart of Jesus.

The Sé Cathedral is considered the centre of Episcopalian diffusion and one of the most important temples of the Portuguese Roman style. Its history goes back to the work of the first bishop, D. Pedro of Braga, corresponding to the restoration of the Episcopalian See in 1070, of which there are no traces.
In this cathedral, you will find the tombs of Henrique of Borgonha and his wife, Teresa of Leão, the Counts of the CondadoPortucalense (first Portuguese County) and parents of king D. AfonsoHenriques.

With almost a hundred years of existence, the building has been recently a target of a profound work of restoration and spatial restructuring that has modernized it keeping the original criteria and has endowed it with one of the most modern technical equipment of Europe.

TheatroCirco is today a reference in the artistic world, not only by the fact that it possesses one of the most charismatic show rooms of the country but because the choice of its programming obeys to a quality criteria and eclecticism, reflecting the strategic goals that were proposed by the majority shareholder for this magnificent Space.